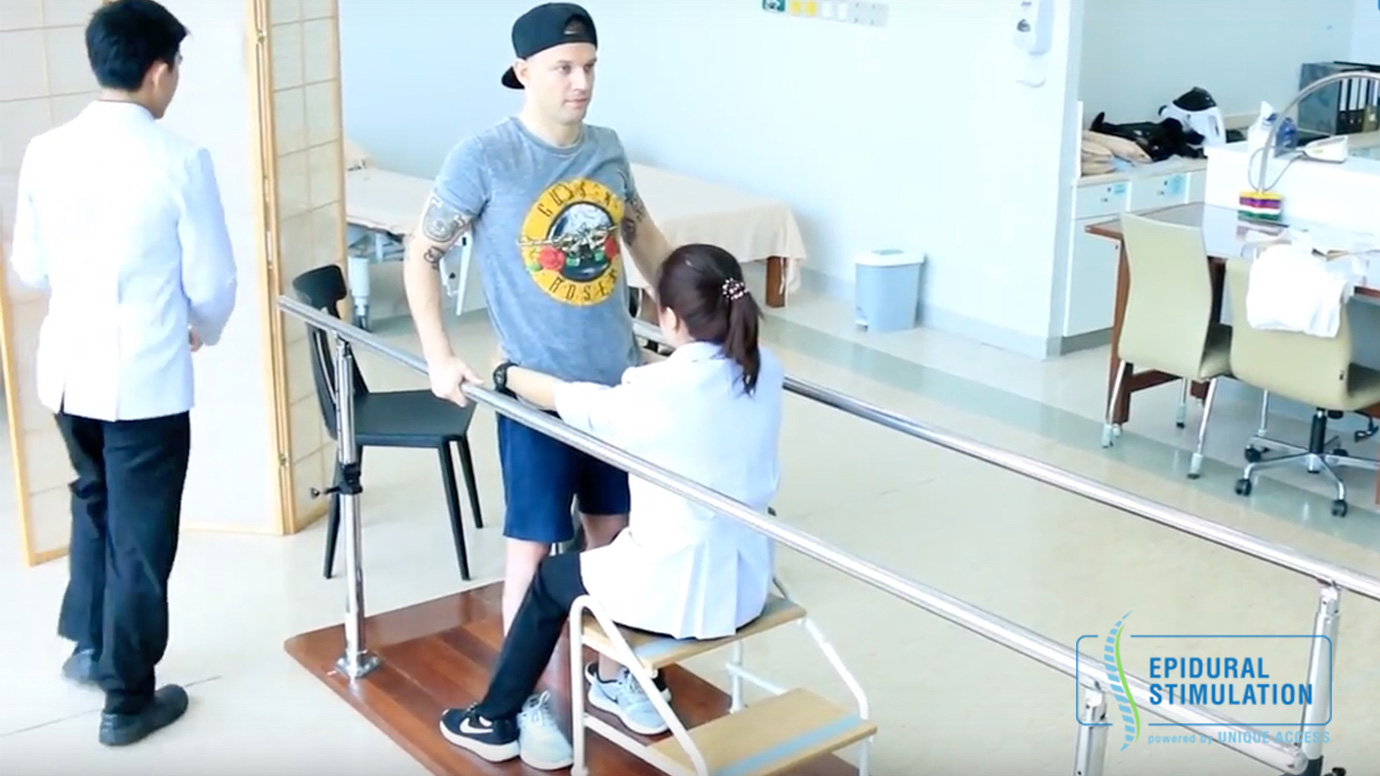 In 2015, Andrew Bell was involved in a devastating road accident in the UK, which left him with a T5 Spinal Cord Injury (SCI) and bound him to a wheelchair. Despite his doctor’s prognosis of permanent paralysis, Andrew was determined to change his fate, a decision that led him to Unique Access Medical in Thailand.

A Spinal Cord Injury happens when there is a damage to the Spinal Cord that will affect the muscle, sensation, or autonomic function in parts of the body below the injured area. An Injury at the T5 region, located in the Thoracic Vertebrae in the mid-back, will most likely affect muscles, upper chest, mid-back, and abdominal muscles in the body. Although arm and hand function are usually normal, the patient’s trunk and legs will lose any motor functions.

Following his second visit to our facilities at the end of 2016 through to the beginning of 2017, Andrew Bell was already able to take steps, stand and hold his own body weight, as well as walk with the assistance of both parallel bars and a walker. In this, his third visit, he arrived looking forward to receiving further rehabilitation and achieving even more new goals.

Andrew shared with us the reason he chose to come back to Unique Access Medical again, to which he said, “After having done a lot of research about the Treatment and about Spinal Cord Rehabilitation, personally, I think this is the best place, and the best facility in the world.”

Moreover, he has also developed a sense of belongingness and a strong bond with other doctors and members of staff at Unique Access Medical. They are able to abolish a formal doctor-patient relationship, and are now working as one team fighting for the same goal. Andrew Bell is also particularly appreciative of a small community of patients with similar conditions as himself, where he is able to share his progress, receive advice, and make new friends.

Following the Physiotherapy Treatment during his third visit, through perseverance, Andrew Bell is now gaining size in his legs and upper body muscles. He also has better control with his trunk and core, which has led to an increased sense of balance, both while standing and sitting down.

Although Spinal Cord Injury is deemed permanent and incurable, the Epidural Stimulation device, which is surgically implanted in the Lumbar Spine region of the patient, allows motor functions which leads to voluntary movements.

For more information about Epidural Stimulation, please contact us and a patient representative will promptly respond to any questions you may have.