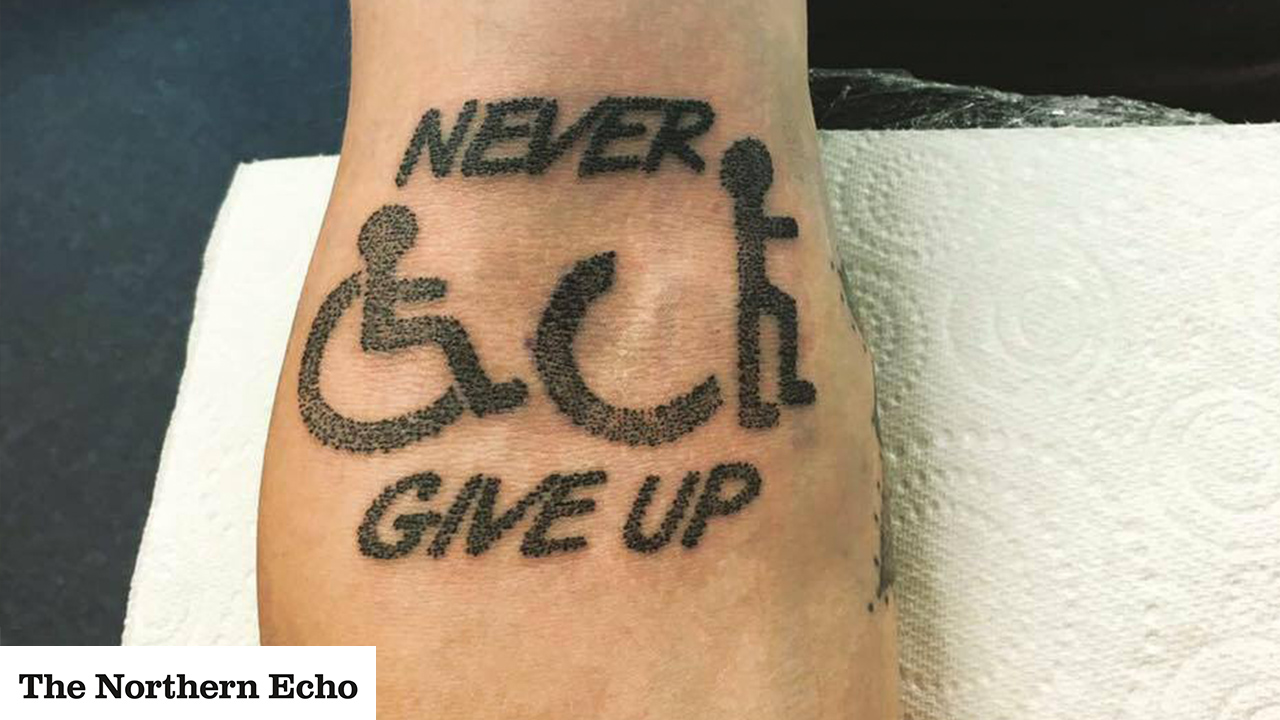 NEVER give up is a motto that Andrew Bell has lived by since being told he would never walk again after a horror motorbike crash.

So dedicated to his recovery, the 32-year-old paraplegic inked the words into his skin as a constant reminder of what he has lost, and what he has achieved.

Now his tattoo design, complete with an image of a man in a wheelchair beside a man standing out of his wheelchair, is proving a source of inspiration to people across the globe.

Mr Bell was paralysed in the accident in May 2015 which left him with multiple injuries including a broken back and punctured lung.

Later that year he underwent groundbreaking treatment in Bangkok when he was the first person in the world to have epidural stimulator surgery so soon after injury – and he was able to stand up before he returned home to County Durham.

He continues to exercise every day and has been back two more times for treatment in Thailand, provided by Unique Access Medical, which is now using his story, his progress and his tattoo to encourage patients facing similar life-changing injuries.

“I know the heart ache and damage that is caused to other people (in these situations) which is out of your control,” said Mr Bell. “My parents and friends have gone through so much, that I didn’t realise until afterwards, so to think my story could help not just a patient but their family and loved ones, to give them hope at a time when there’s so much unknown, just gives me pride.”

Originally from Durham City, but now living in Chester-le-Street, Mr Bell’s tattoo was so admired by the Epidural Stimulation programme team that the logo and accompanying motto have been printed on T-shirts given to patients free of charge on their arrival for treatment.

A photograph of the crash victim standing against all odds during one of his trips to Thailand has also been used for a poster designed to inspire people facing a long road to recovery.

“I made it myself and it helps me get out of bed in the mornings when I feel down in the dumps,” he said. “I want to raise awareness and a positive outlook for patients who become paralysed and who are, not just in the UK, given the negative outlook I received which was that I was going to be in a wheelchair for the rest of my life and would never walk again. I saw this as a challenge and thought I would take my destiny into my own hands.

“I was told I would never wiggle a toe again and now I’m walking with a walker for short distances and can stand for well over half an hour on my own.”

Mr Bell’s remarkable recovery has taken him into five schools across the Durham area and Newcastle where he has delivered motivational speeches.

A keen sportsman himself, Mr Bell is getting back to martial arts and is now scheduled to deliver a talk to able-bodied players from a Premiership Rugby club.

He is also a go-to contact for paralysis patients accessing the treatment in Thailand and he regularly visits patients at James Cook University Hospital, Middlesbrough.

“It’s something I get a lot of pleasure out of,” he added. “I can use my story as a way to inspire people to be the best they can be, even as a professional rugby player.”