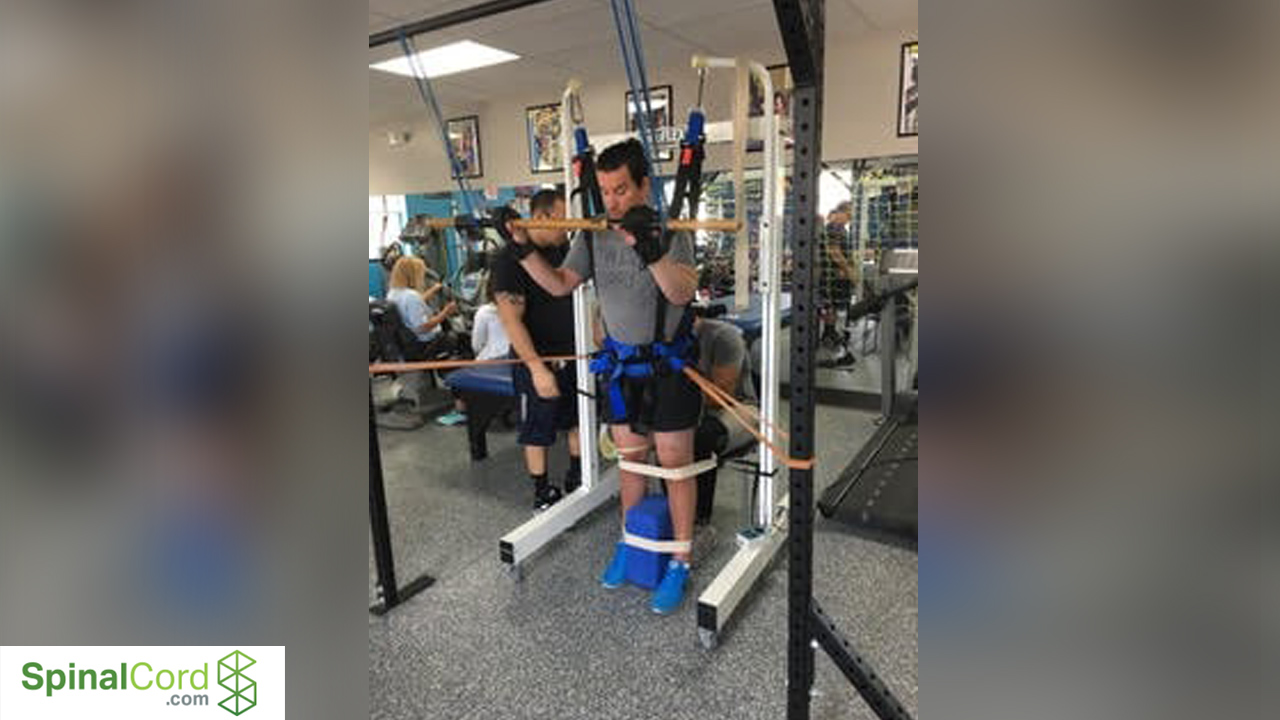 Has Quadriplegic David Hill Found the Cure He Was Looking for?

David Hill is a huge Florida Gator football fan, a loving son, and an irrepressible optimist. He is also a survivor of a C4/C5 spinal cord injury (SCI) that left him a quadriplegic. Yet, despite losing the use of his arms and legs, he hasn’t given up. Every day, he maintains a routine to get as much exercise as he can with the help of both professional caretakers and his family.

Every day at 7:30 am sharp, David starts his day with the help of caretakers to get fed, do his bowel program, brush, clean up, and get started with exercising on a special Functional Electric Stimulation (FES) bike that uses electro pads to stimulate muscles in his arms and legs to prevent atrophy.

Why does David try to get in as much exercise and activity as possible? First, it helps him stay healthy and helps with his rehabilitation. Second, he’s trying to prevent the muscles in his arms and legs from becoming atrophied in the hope that he’ll soon be able to regain some use of his limbs.

What has David so optimistic about possibly regaining the use of his limbs? A new treatment for people with spinal cord injuries called epidural stimulation.

Spinalcord.com recently interviewed David to talk about his life after his injury, and his upcoming epidural stimulation treatment.

The Biggest Challenge in Getting Treatment for Quadriplegia

However, funding this treatment has been problematic. As David said in his interview with Spinalcord.com, one of the biggest challenges in getting treatment was money:

“The insurance company said my condition hasn’t improved enough to warrant more physical therapy, so they stopped covering it. I lived in Orlando, but I couldn’t afford to live on my own anymore. My parents have a place in Charleston so I went there. Besides that, I go to a place called NextStep. I love going there. When I was in Orlando, I’d go 2x a week. If I had more money, I’d go every day. The best part about it is I get to go out of the chair.”

Getting treatment to improve his condition costs money. This is normally where insurance would be important. However, David’s insurer declined payment for therapy after a lack of sufficient improvement from therapy.

As David said in the interview, “You really just have to stay on top of it with the insurance company. They’re only going to allow so much. SCI recovery is such a long process; it could take years. But the insurer’s going to want recovery so much faster.” From the insurer’s perspective, they’re paying to see immediate improvement. When improvement milestones are measured in the slightest ability to move your upper torso, it can be hard to make others understand just how impactful and important that is.

The Long Road to Recovery

To highlight how long it can take to see major improvement, David talked about another quadriplegic he met at the NextStep program: “Amanda’s been paralyzed for 10 years. She’s gained a lot from where she was, but it’s not a quick process.”

David’s own progress, thanks to his time at NextStep, has been significant but slow. When asked about how his therapy helped him with his quadriplegia, David said:

“I definitely gained more control of my trunk. Because, I wasn’t able to hold myself up, but I can now if I have my arms to my side. I have more control front to back and side to side now. Just getting out of the chair is such a relief. It’s just really great for my mental state too.”

Just getting some control of his upper body to hold a pose in his chair took a tremendous amount of time. David is hopeful that the epidural stimulation therapy will be quicker to produce results.

At first, David was skeptical about the treatment because it sounded too good to be true. So, David did some digging into the hospital and this revolutionary new treatment. During the interview, David said that “I saw the article about the epidural stimulation. Pretty much a 100% success rate of getting something back. They had two quad patients and one guy got some movement back in his arms. I did a bunch of research to verify that it wasn’t just some quacks overseas.”

Some patients reported results in as little as 7 weeks, which was also significant. While 7 weeks sounds like a long time, it’s a massive improvement over years or decades.

How Does Epidural Stimulation Work?

Epidural stimulation is a relatively recent development in the treatment of spinal cord injuries. In this procedure, a device is implanted on the surface of the upper (i.e. cervical) spinal cord. This device then delivers electrical impulses designed to imitate signals from the brain to restore movement to previously paralyzed parts of the body.

Right now, David is still trying to raise funds for his treatment. All told, he needs roughly $100,000 to pay for his treatment since his insurance isn’t covering the costs. However, as David said, “if it gets me just a little movement back in my arms, it’ll be worth every penny of the cost.”

To help him pay for his treatment, David, his friends, and his family are all holding fundraising events and even running a GoFundMe campaign online. David is incredibly grateful for all of the friends, family, and strangers who have contributed so far, saying that “I am more grateful for them and just everyone who’s sent me cards, or emails, or FB posts saying I’ve inspired them. Knowing that I do have friends and family out there really helps me feel better and fight that depression that a lot of us with spinal cord injury have. Without them, it would be a lot harder to recover.”

However, since he initially raised money to pay for his emergency treatment, things have slowed down. A lot of the people who helped him pay his medical bills following his injury just can’t afford to pay more now. This is why his friends are helping him by organizing more fundraisers and managing his GoFundMe campaign online.

You can help David raise money for his operation at https://www.gofundme.com/dhillstrong.

Everyone here at Spinalcord.com wishes David the best of luck on his new treatment, and hope that many other SCI survivors will benefit from epidural stimulation treatment and other therapies in the near future!