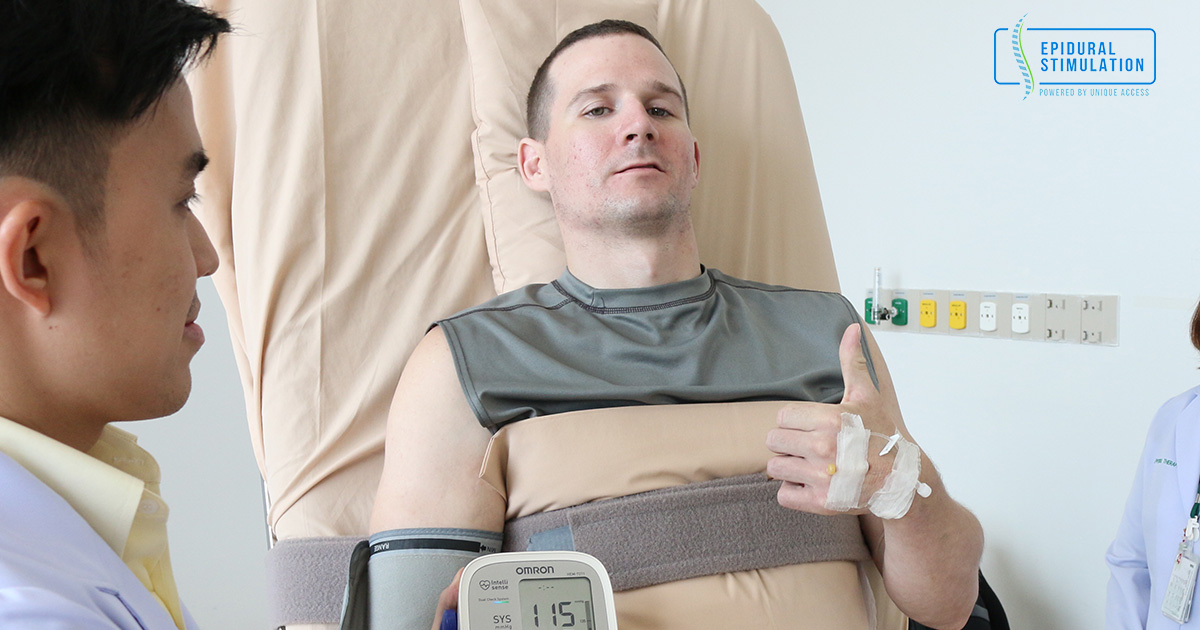 In 2012, Isaac Darrel became paralyzed from the waist down after a devastating diving accident. And on top of the life-changing news that his doctors believed he would never walk again, Isaac also had to get used to the unexpected complications that accompanied his spinal cord injury (SCI).

Everything from bowel movements to blood pressure became a daily concern. As an active and athletic 32-year-old, he refused to accept that these challenges could not be overcome by modern medicine. Isaac wanted a treatment that was both pioneering and proven, so he turned to Unique Access Medical (UAM).

In recent years, SCI patients with complete and incomplete injuries have regained voluntary movement thanks to a short surgical procedure involving a neurostimulator device. In Isaac’s case, a three-hour surgery was all it took to attach the stimulator to his C7 vertebrae and restore the severed connection between his brain and the damaged nerves.

That surgery enabled him to complete 40 days of extensive physical therapy in tropical Thailand with UAM’s team of Epidural Stimulation specialists.

Proudly disproving the conventional wisdom about cervical spine injuries, Isaac regained some control and strength in his lower extremities. Eventually, he was lifting his legs for assisted steps and doing sit-ups. But those weren’t the only post-surgery improvements.

These issues create extreme discomfort and frequent fainting, and can also be fatal if the person experiencing them falls or loses control due to an episode. Medications, compression stockings, and abdominal binders help to stabilize blood pressure level, but they are far from ideal when those who need them have limited mobility and independence.

Doctors quickly realized that Epidural Stimulation devices can do more than restore voluntary movement — they can also regulate blood pressure. Isaac was one of four people to participate in an academic study that focused on properly calibrating the stimulators to reduce the frequency and intensity of cardiovascular abnormalities.

The results were incredible. Beyond the potential long-term benefit of strengthening his heart, Isaac noticed an immediate decrease in recurring issues such as light-headedness, dizziness, and trouble concentrating.

Isaac claims to have observed no negative side effects from his Epidural Stimulation device, either in the days following his surgery or in tests during the cardiovascular study. Given the existing literature and this new study, it is safe to conclude that similar results are available to any SCI sufferer who wants them, though they will vary from patient to patient.

Looking forward, doctors are further honing this research so other motor-complete SCI patients aren’t forced to rely on slow-acting pharmaceuticals with long lists of side effects to treat orthostatic hypotension and autonomic dysreflexia.

The catalog of SCI recovery stories and case studies spans several years for UAM patients. Most are related to restoration of voluntary movement, but Isaac’s story shows that the benefits of Epidural Stimulation are more numerous than doctors had imagined.

No other company in the world is facilitating these treatments commercially. So if you or a loved one would like to know more about this breakthrough technology, there’s no better source of information than the UAM website. Check it out for testimonials, case reports, and answers to frequently asked questions.