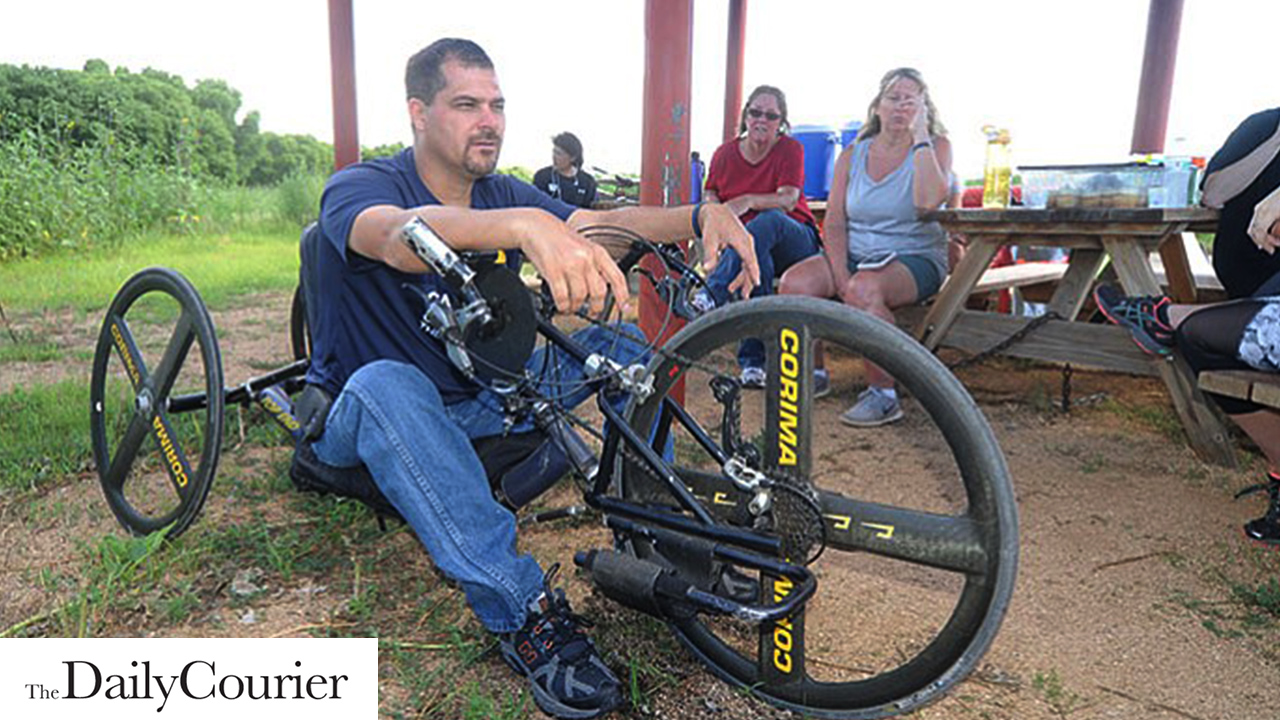 Twelve years ago, Robb Martin was an active police officer with Prescott Police Department when a recreational accident left him paralyzed from the chest down.

“I was on a four-wheeler in the sand dunes,” Martin, 42, said. “I was on my way back to camp just putting along when I hit a bump. It threw me off the front, my helmet got stuck in the sand, my legs just kept going and I broke my back right at the chest level.”

After getting out of the hospital and going through some rehabilitation to get his arms, shoulders and neck moving normally, he continued to work for the police department in the dispatch center and has been there ever since.

Despite his condition, Martin has remained incredibly active.

“The guy is always busy,” said Tom Newell, a longtime friend of Martin’s.

With some help from his friends, he managed to build a workshop on his property and is consistently in there modifying objects to fit his needs or assisting friends and family with various projects.

Since the accident, Martin has looked for ways to improve his mobility. Physical therapy has been helping, allowing him to regain back and stomach muscles in recent years.

“I can do pushups and actually support my waist, which is amazing,” he said.

His goal, however, is to once again be on his feet.

“Just to even stand up and grab something out of a cabinet would be phenomenal,” Martin said.

That dream might come true if he can raise the funds to have a recently developed procedure done in Thailand by a company called Unique Access Medical.

The procedure, referred to as epidural stimulation, involves surgically implanting a device along a damaged portion of the nervous system, according to the company’s website. The device then applies a continuous electrical current.

“It acts kind of like a jumper cable, for lack of a better term,” Martin said. “It just connects above the affected area and allows the brain to reconnect with the spinal cord under the affected area.”

In combination with the implant there is an assisted rehabilitation process, which takes about 40 days to complete.

The procedure has yet to be seriously implemented in the U.S., Martin said, because of how new it is to the medical industry. So far, however, he hasn’t heard of any unusual risks associated with the procedure and has spoken with two individuals who successfully went through it.

“One guy is walking up to 30 meters unassisted,” Martin said. “Another guy, the day after surgery, he was standing up by himself in a pool.”

Not able to afford that between him and his wife, he’s turned to the community for help. Friends and family have already been busy contributing and organizing events.

Just last Saturday, Aug. 12, about $5,000 was raised on his behalf from two fundraising events hosted by his friends Tony and Liko Harwood.

“Tony wanted to be involved and couldn’t just sit still and not make any money for Rob… so here we are,” Liko said Saturday during one of the events.

Another $2,000 was raised from a donation bucket placed inside Scout’s Gourmet Grub in Prescott.

Quite a bit more was also raised by fundraisers hosted by the Northern Arizona Regional Training Academy (NARTA), the local police academy.

“My surgery is approved, they’re just waiting for me to set up a date,” Martin said. “The funding is really all I’m waiting on.”

For more information about Martin’s story, visit The Daily Courier