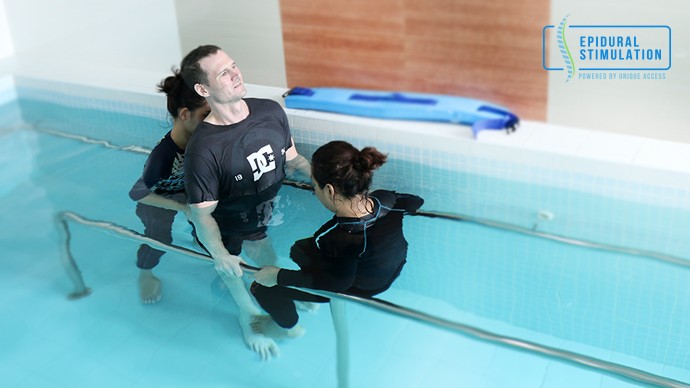 Strive to Stride, Isaac’s Journey to Walk Once More

The life-changing procedure that brought him across the globe.

The video below documents Isaac’s experience throughout the duration of his epidural stimulation treatment. More details of his story can be found below the video.

When Isaac’s life changed four years ago he probably felt a bit lost, like countless others who have suffered a spinal cord injury. The accident that confined him to a wheelchair now had him looking for more answers. Because for him, simply accepting his circumstances just wasn’t his style. He had been an active and athletic guy until his injury, and he had no interest in changing that. He researched and learned for himself all of the options available to someone in his situation, hoping for a light at the end of the tunnel. Finally, he decided to put his research into action and began looking into Epidural Stimulation.

Earlier this year, doctor’s qualified Isaac Darrell for the epidural stimulation program for his spinal cord injury. The diving accident he suffered damaged his spine and left him without the use of his legs. He approached Epidural Stimulation Now to learn more about his options and, following a consultation, decided that a trip to our facilities in Bangkok was the best course of action for him. Now you can imagine the range of emotions he felt when he arrived at the hospital and spoke to our doctors. If it were you, you’d feel excited, curious, nervous and very carefully optimistic. Isaac was no different.

If you’re new to epidural stimulation, we’ll quickly explain how exactly the doctors were going to help our young new patient.

Epidural stimulation is multi-step process that involves implanting a small device that is designed to bridge the brain’s signal with the affected nerves in the spine. It delivers low-frequency currents to specific nerve segments to stimulate motor function. Then, the mapping process ensures that the device to will get a response from affected areas to the corresponding actions. Although Isaac was well aware of the procedure, having researched it for a number of months, he still had the jitters. But, once his surgery was completed he understood just how simple and non-invasive the whole process was. Then, doctors turned the device on.

Dr. Nasir, Isaac’s lead specialist during his treatment, recalled how his patient and his mother felt when they witnessed him moving his legs for the first time in four long years.

“… It was the first time he (Isaac) was moving his legs in four years, so it was very emotional”

From then on, Isaac became the living proof that perseverance and a strong spirit can make anything happen.

Mr. Darrell was assisted by a team of specialists that helped him at every level of his recovery. Localised pain and blood pressure were regulated by acupuncture and his core and trunk strength were increased with exercise, conditioning and therapy. Things were going great, so great that with each passing day, Isaac could stand using parallel bars for longer durations. He had more energy, his range of motion had improved, his autonomic dysreflexia had also improved, and his confidence was sky-high. And for his team at the hospital, it was wonderful to see.

During the final days of his treatment, Isaac sat with us as he had many times during his stay. He was different than when he first came to us, he had renewed vigor. He described what it was like during his stay and talked about how great it was to take his first steps since his accident years ago. He was happy he did this. And we were thrilled to see how far he’d come in a few short weeks.

“It’s changed my life for the better and I believe that it will change yours, because the results speak for themselves”