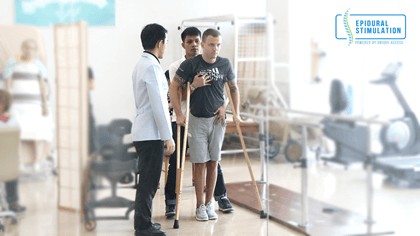 Andrew Bell was involved in a motorcycle accident while in the UK. An inattentive  motorist knocked him down in the horrid accident leaving him with severe T5 Spinal Cord Injury.

Determined to take control of his life, he contacted Unique Access Medical and made a trip to Bangkok for an Epidural Stimulation procedure. Andrew later then decided to make a second trip to Bangkok for further rehabilitation to help him get back on his feet as soon as possible.

After spending the past three months in Bangkok, Andrew is now able to make some steps, stand and hold his own body weight. He’s also seen further improvement in his trunk and balance control; and he is also now particularly impressed and  encouraged by the significant change and improvement in his ability to control his bladder. While before he was filling about 6 catheters a day, he is now filling only about half of that.

Depending on the location and severity of damage along the spinal cord, the symptoms can vary widely, from pain or numbness to paralysis to incontinence. The prognosis also ranges widely, from full recovery in rare cases to permanent tetraplegia (also called quadriplegia) in injuries at the level of the neck, and paraplegia in lower injuries. Complications that can occur in the short and long term after injury include muscle atrophy, pressure sores, infections, and respiratory problems.

An incessant Andrew remains determined to do everything to walk independently again. During his recent rehabilitation in Bangkok,he was able to go from using parallel bars to a walker. Beer, the head of Andrew’s rehabilitation program, has now equipped him with an extensive treatment plan for him to follow when he gets home. This will hopefully make him see even more significant improvements in the future, and make him achieve his seemingly simple yet personally enriching goal of being able to stand and attend a full concert.

With a physical therapist waiting to work with him in the UK, coupled with Andrew’s admirable determination, we are confident that he’ll continue making great strides on his way to complete recovery.

Our very warm and best wishes for the future Andrew!

If you would like to know more about Epidural Stimulation, please fill in our contact form and a member of our team will get back to you as soon as possible.