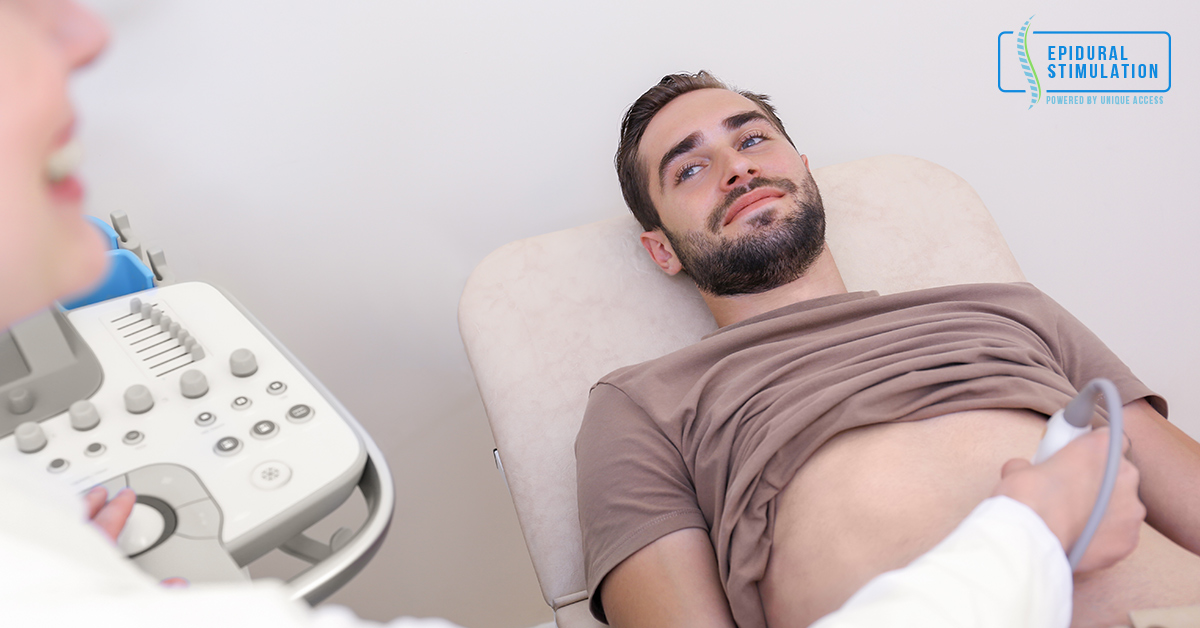 Spinal cord injury patients who suffer from paralysis often experience problems in bowel function. This is called Neurogenic Bowel Dysfunction (NBD), and it leads to a range of challenges including constipation, incontinence, and evacuation difficulties. Patients suffering from NBD must learn how to cope with these symptoms in order to better manage their bowel movements, and in this article we will discuss bowel management after spinal cord injury and the potential for Epidural Stimulation to help improve the quality of life of SCI patients affected by Neurogenic Bowel Dysfunction.

What Is Autonomic Dysreflexia?

Autonomic Dysreflexia or hyperreflexia is a condition characterized by a sudden onset of excessively high blood pressure. It is caused by the over stimulation of the Autonomic Nervous System, and it is common in patients with UMN bowel syndrome. Autonomic Dysreflexia “occurs when an irritating stimulus is introduced to the body below the level of spinal cord injury, such as an overfull bladder.” Symptoms include pounding headaches caused by the elevated blood pressure, sweating around the level of injury, nasal congestion, and slow pulse.

When hyperreflexia occurs, the stimulus sends nerve impulses to the spinal cord, where they travel upward until they are blocked by the lesion at the level of injury. Since the nerve impulses cannot reach the brain, a response is activated that increases activity of the autonomic nervous system which causes the excessive elevation in blood pressure.

Urologists and neurologists are discovering ways in which Epidural Stimulation may be used in conjunction with Mapping to mediate bladder and bowel control. In a number of studies, it was recommended to record and observe the Mapping process and the participant’s response to various stimuli.

The results of one study, published by the National Institutes of Health (NIH), suggests the following actions for identifying the neural pathways or sites that stimulate the bladder and bowel function:

1. To stimulate potential sites which could help improve bowel treatment, Epidural Stimulation may help to find stimulation sites for activation of skeletal muscles that are known to be close to the spinal bladder nuclei. These sites could be discovered by identifying electrode combinations and stimulation parameters through the use of Mapping to examine the effect of stimulation on bladder filling in which the process is slow.

2. One of the ways to determine which sites are suppressing peristalsis is to record sphincter Electromyography (EMG) activity. The location of sites and parameters that promote urine storage and continence are then identified by recording phasic reflex bladder contractions in a partially filled bladder and then determining which sites are weak in promoting these contractions. Another option is to record sphincter EMG activity and determine which sites enhance this activity to maintain bowel functions.

3. Mapping of spinal sites that promote urination can be performed. One of the best alternatives is to identify sites or patterns where stimulation does not interfere with the guarding reflex during filling, but enables continuous bladder contraction and sphincter relaxation during active voiding. In participants with Detrusor Sphincter Dyssynergia (DSD), the research indicates the possibility for Mapping to train the bladder/sphincter to coordinate a voiding response.

Bowel management in spinal cord injury patients is influenced by the lifestyle and the severity of bowel impairments in each individual patient. All patients need to make sure their bowels are emptied every one or two days. Doctors must provide a systematic and comprehensive evaluation of bowel functions.

Most bowel management programs will begin with an insertion of either a suppository or an enema, with a waiting period of 15-20 minutes to allow the stimulant to work. The next step is digital stimulation, which is a way of emptying the bowl by moving the finger or other apparatus, such as a “dil stick,” inside the rectum and moving it circularly. It is usually performed every 10-15 minutes until the rectum is empty. This procedure works well on patients with flaccid bowel.

Bowel management treatments of this sort typically require 30-60 minutes to complete and are performed in the commode or on a movable toilet. However, those at high risk for skin breakdown must carefully consider the bowel evacuation options, as ones performed in a seated position may not be as safe as when lying on their side.

Constipation is a problem for many spinal cord injury patients, especially those with neuromuscular-related paralysis. But as the NIH points out, there are several types of laxatives to help with constipation, and “can include peristaltic stimulants, osmotic laxatives, bulk forming agents, and stool softeners.” But patients and treatment providers must be careful, as these can cause unplanned bowel evacuation and increase the amount of time it takes to complete an evacuation, as well as cause worse constipation should they be used too much.

Suppositories are small, round shaped object that you can put inside your body for medication. There are two main types of suppositories for spinal cord injury patients. Most of them have an active ingredient called bisacodyl, and they are vegetable- based (e.g. Dulcolax) or polyethylene glycol- based (e.g. Magic Bullet). Bullets are said to be faster and more effective.

Antegrade continence enema is another option for some people with bowel dysfunction. This technique involves surgery to create an opening in the abdomen, allowing for introduction of liquid above the rectum, thus causing fecal material to be flushed from the bowel. This method may decrease bowel care time and allow for a break from medications.

One of the best ways to shorten the process of bowel management for spinal cord injury patients is through the process of colostomy. This surgical option creates a permanent opening between the colon and the surface of the abdomen to which a stool collection bag is attached. Colostomies sometimes become necessary because of fecal soiling or pressure sores, continual stool incontinence, or excessively long bowel programs. It enables many people to manage their bowels independently and colostomy takes less time than bowel programs.

When standard NBD management programs fail to produce results, and a patient’s quality of life suffers as a result, surgical procedures become a viable option. And while there is no consensus on its overall effectiveness, the literature on spinal cord injury treatment contains an array of studies that have experts intrigued by neurostimulation’s potential for clinical use.

Several methods of neurostimulation for treating NBD have gone through pilot studies, and in conjunction with Mapping, epidural spinal cord stimulation warrants further research to achieve improved bowel function in SCI patients in the future.